Quadris is a registered supplier on select UK public sector frameworks. Read more about how you can engage and purchase our solutions.

COME AND WORK FOR QUADRIS

We are building a team of like-minds who are not afraid to push the boundaries of whats possible. Find out more and see our open positions.

Our support team may need to gain access to your machine when diagnosing and solving problems. Start a secure remote session using this link.

frameworks
work for us
connect
connect

Our Managed Digital Workspace service gives the people in your organisation everything they need to work securely from any location.

24/7/365 monitoring, alerting, incident remediation, and maintenance for all your network, storage, and compute infrastructure.

Total threat detection, prevention, and response designed to protect you, your people, and your organisation.

What is covered in this article.

In this article we provide a guide discussing how to run Citrix XenDesktop 7.15 on the Nutanix NX platform running their Acropolis Hypervisor Platform.

We at Quadris have been hugely impressed with this release and would like to share with you information how to run it on Nutanix NX and their AHV hypervisor. Are you not familiar with Citrix XenApp & XenDesktop 7.15 or what it brings yet? if not, we recommend you take a few moments and read all about it here.

The customer was attracted to hyperconvergence to overcome the scalability and performance issues they had been experiencing with the current infrastructure. Using AHV as the hypervisor has a few clear benefits which both ourselves and the customer were particularly keen on. Most notably the management and provisioning is no longer a single point of failure as this is available on a virtual IP that fails over between nodes in the event of a node failure.

What works and what does not.

Before starting there are a few caveats or system requirements to be aware of.

There are also a few features that won’t work.

Setting up your hosting connection.

However, after visiting the Nutanix site (you will need a login for this) you can download and install 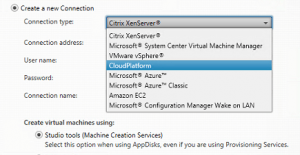 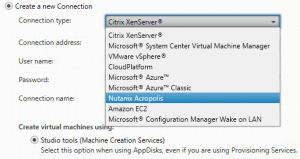 You will then be able to set resources etc as normal to provision machines.

Once we were at the stage of deploying the VM’s we were very impressed by the speed of building and catalogue updates which were typically around 120 seconds. This is largely down to the way AHV handles a snapshot chain vs other hypervisors – nice work Nutanix !

This could in its self be a topic for another blog post, but essentially Nutanix does not have a maximum Nutanix chain depth. It performs a background copy of the data which makes the metadata available to the child snapshot so the chain does not have to be traversed to find it. This means there is no IO on a child snapshot whether this is number 10 or 1000.

With the snapshot performance you can now keep a much larger number available. However, if you are anything like us and you update your images at the same time and nicely label them then other hypervisors make this easy and you can traverse the chain out as follows so it clear where each VM came from:

However, if you look at the same thing using AHV as the hosting the snapshots are listed in alphabetical order:

So, the key here is to name you snapshots something that distinguishes them or you could be in for an admin nightmare!

Some issues we encountered:

We came across a few simple issues that we didn’t expect based on our experiences with other hypervisors but hey this is early days for AHV still. Most notably was the switch to daylight saving time. Although AHV displays daylight saving adjusted time we found that when our VM’s came up from a cold boot (all the Citrix VM’s after scheduled reboot) GPO’s were not aligned as the time was not updated until after the policy was applied. We updated the registry on the guest OS to ignore the Hypervisor time, however we are waiting to see if this still works when the clocks revert in a few weeks!

There are also another couple of features we personally like in other hypervisors which we would like to see more of in AHV. We often like to target resource pools to provision VMs purely for organisational purposes. Affinity rules, although available, are a bit fiddly if you are looking to keep your storefront and delivery controllers on different hosts  (which you should!).

As well as just loving the performance, scalability and ease of use of the Nutanix host platform our experience with AHV was positive and given the highly resourced development of the product by Nutanix we expect it to become a major force in the hypervisor market.

Next up, we review running Citrix XenDesktop 7.15 on the latest Dell EMC vSAN HCI

7 steps that will ensure your new distributed workforce stays connected, productive, and secure

How to go about ensuring that your organisation is ready, willing, and able to operate a digital...

While most organisations have embraced remote working, the one area that is proving to be the...

How Managed Services can help your IT staff avoid burnout

The move to remote working caused by the pandemic caught virtually every organisation completely...